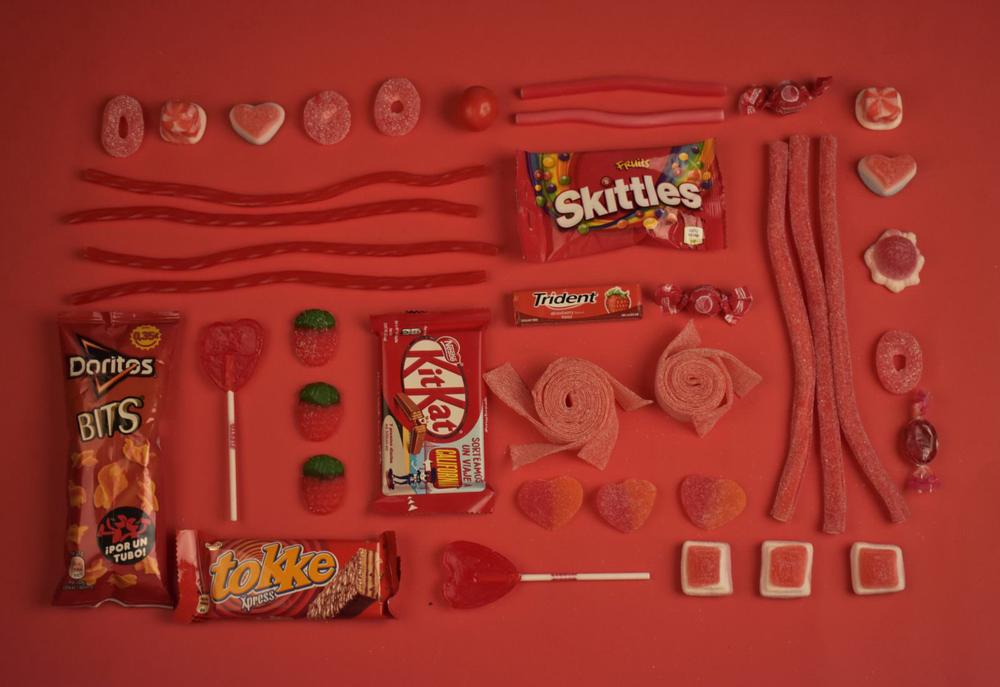 Twizzlers probably remind you of snacks you’d get in the vending machine in your middle school, or at least that’s what they do for me!

If you ever wondered why Twizzlers are so chewy — zing! It’s because the second ingredient in this snack is wheat flour, of which they’re primarily based. The rest is sugar. Stay far away!

With gluten-free beer becoming more and more popular, keep in mind that there is a difference between gluten-free beer (brewed from inherently non-gluten ingredients) and beer that is ‘nearly’ gluten-free, or rather, gluten-omitted.

Gluten-omitted beer is brewed from gluten-containing ingredients, including wheat, barley and rye. The most popular brand is Omission, which you’ll find at trendy bars serving up gluten-free alcohol options.

Be careful, though, because if you are celiac, consuming a beer marketed as gluten-free like Omission may present side effects or reactions, depending on your intolerance and reaction levels. If you are a celiac, avoid, avoid, avoid! 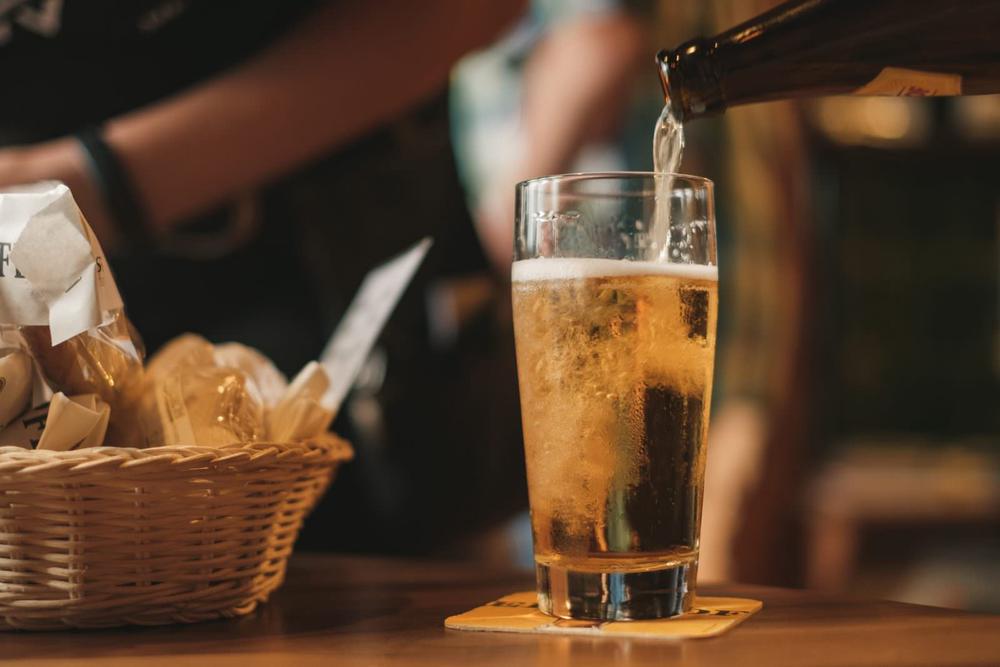 Haribo is a yummy snack brand that has a whole line of gummy chewy candies, from bears to Coke flavor.

While not all Haribo gummy products contain gluten ingredients, a good portion of them do. Haribo is kind of like a trick question, because to really know, you have to read the package of the product in front of you. The catch here is that the label will say, “Glucose Syrup (Wheat or Corn) and Dextrose (from Wheat or Corn),” meaning you can’t be sure if the starches are wheat or corn-based.

According to Haribo’s website, they’ve made the change in the clarification of ingredients to “ensure consumers’ safety.” While this is certainly helpful, it is up to you, the customer, to differentiate and use your budget judgement before buying “Haribo Gold Bears Holiday Edition” (contains gluten) versus “Haribo Happy Cola” (gluten-free). 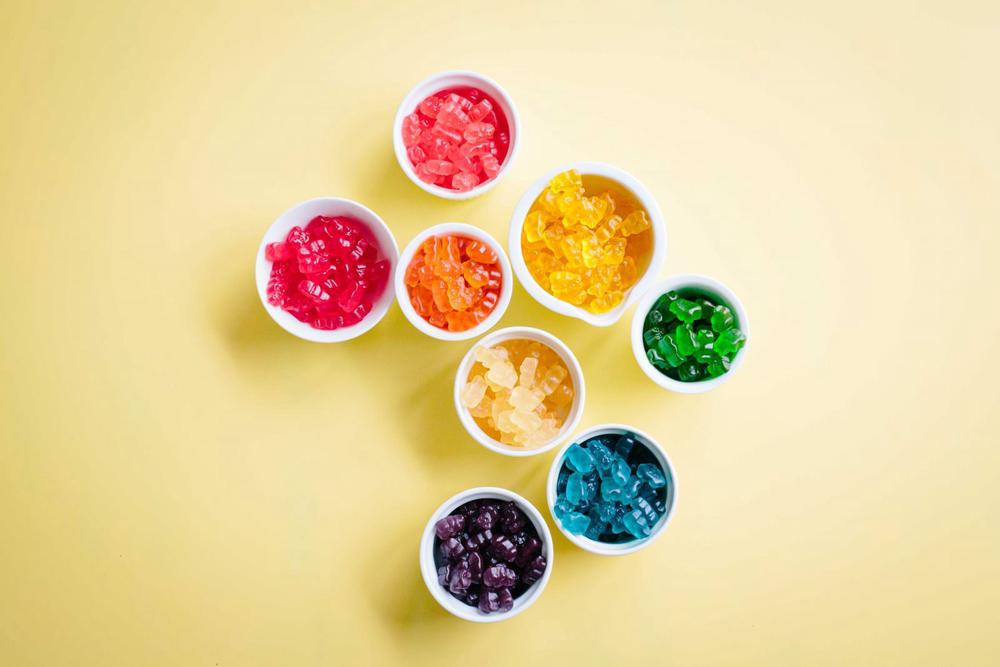 Because Doritos are not gluten-free, I haven’t had them since 2005. I’m surviving (on Tostitos and authentic Mexican-style totopos de maiz, naturally)!

For example, Doritos Nacho Cheese flavor straight-up lists “wheat flour” as an ingredient hidden somewhere in the middle of the ingredients list. Doritos Spicy Sweet Chili, although sounding delicious and like something I’d love to eat, lists “soy sauce (soybean, wheat, salt)” in its top ingredients.

Skip these, and opt for a wide range of corn chip options out there like Popcorners.

What a shame — these chips resembling potato chips make you doubt that they’d ever contain a high amount of wheat starch.

With a rather small potato content, the remainder of the ingredients in these popular snacks continues as, “wheat starch and flours (potato, corn, and rice).” This goes for all varieties of Pringles, so bring an alternative chip, like Pop chips or Fritos.

Aw man! CLIF bars fall into that category of ‘healthy snack bars’ for hiking, travel and being on the go, but if you read toward the end of the ingredient list — there it is: barley malt.

Worse still, there is no disclaimer in bold at the bottom that the product contains wheat; well, it’s not a lie, because the malt comes from barley, but overall, there is no gluten disclaimer. Choose an alternative like Lara Bar or RXBar.

You thought Frosted Flakes were gluten-free, didn’t you. Well, I did, and when I do the research, time and again I forget that they contain this gluten contaminant: “Malt flavoring.”

You could easily be fooled, or have a friend who is, because this is neither “wheat flour” nor “wheat starch,” and there’s no gluten disclaimer in bold at the bottom, either.

In fact, Frosted Flakes seem pretty benevolent, what with having such a short list of ingredients, in comparison with other large-name cereals in their class. 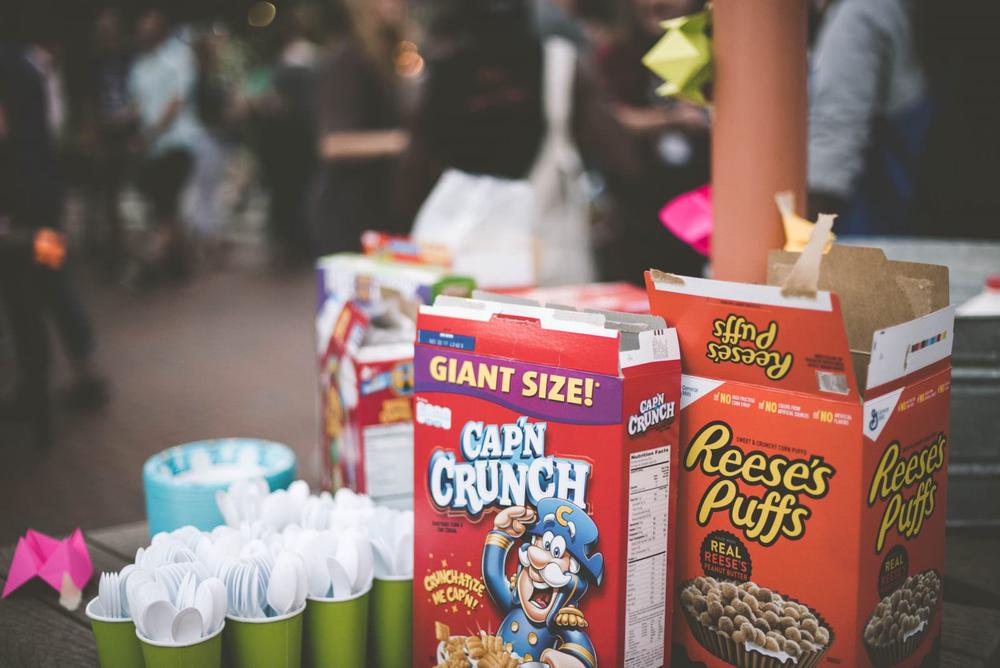 Isn’t Smirnoff vodka gluten-free, or at least marketed as such? Well, yes, you’re right, but Smirnoff Ice as a bottled ready-to-drink mixed alcoholic beverage has an added ingredient of malt. In fact, Smirnoff Ice is marketed as a ‘malt beverage,’ not even a vodka beverage!

If you have a hankering for a mixed vodka drink, make it on your own, or go to the party with a bottle of Smirnoff in hand and a mixer in the other. Smirnoff Ice will only give you a stomach ache if you’re gluten-intolerant or have celiac disease.

Don’t let your assumptions fool you — if you’re a heavy consumer of all things Tostitos, you’re usually in the clear.

Tostitos corn chips are 100% corn and sometimes have added ingredients like dairy (the ‘lime flavor’ variety), but (!) the multigrain tortilla chips by Tostitos have a sizable list of a mix of grains, ending in wheat flour.

Good thing we read the package! These are not safe for gluten-free dieters. 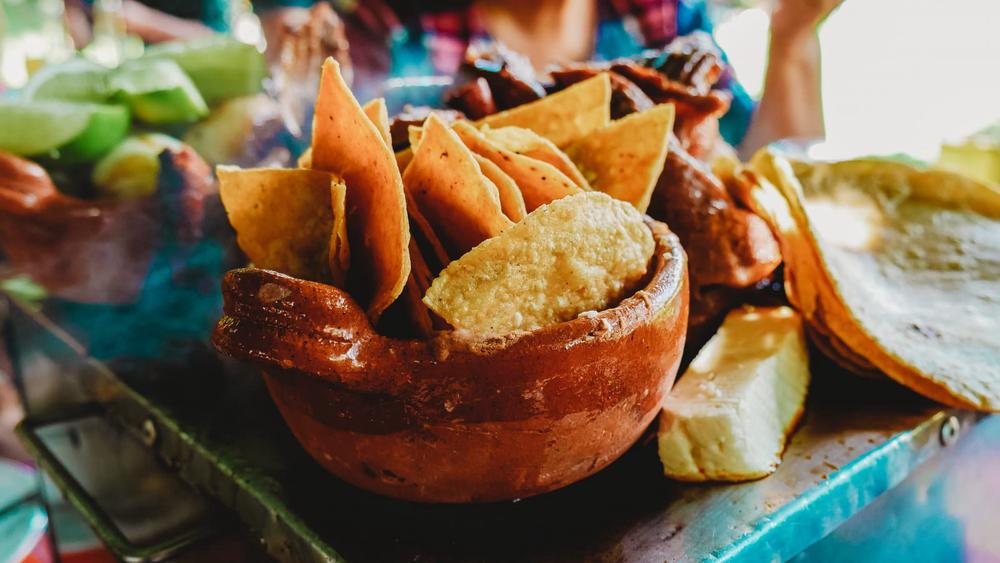 Chex Mix might even be the first snack food that comes to mind if you’re considering grabbing a snack in the airport or picking up something for the group before a hike.

Look closely, though, and you’ll see that the very first ingredient in Traditional Chex Mix is ‘wheat flour.’ This is a curveball because Chex recently made Rice Chex and Corn Chex 100% gluten free … but only in their pure cereal-box form.

Peas and wasabi flavor: sounds like a great combo for those who love a poppable spicy snack.

Wasabi peas, no matter which producer is making them, usually are made with a carby-salty mix of cheap ingredients, starting with corn flour and wheat flour (usually as a combination).

A package may also mention ‘starch,’ which is a red flag for asking, Which type of starch? If you can’t figure it out, and if the package is not marked GF, turn right back around and put them back on the shelf. The good news is that you can make wasabi peas at home.

Whoppers are a staple at the candy section and in the movie theatre, and they sure are delicious (I ate them a few times before being diagnosed with celiac disease!).

If you have yet to discover that ‘malt’ is in fact a barley product, then pass this snack on to a gluten-consuming friend, as the ingredients read: “malted milk (barley malt, whey flour, milk, salt, sodium bicarbonate).”

Corn pops sound like a GREAT choice for your breakfast, or this is what your friend or family member may have thought when they chose to serve them to you.

Make a case for looking at the ingredients of any cereal, as the ‘corn’ in the name of any morning sweet grain cereal can be completely misleading.

As seen in the ingredients of Pops, the end of the complete list reads… “wheat starch, annatto color, BHT for freshness.” Say no!

SlimJims are what many consider to be a protein-rich quick snack you can slide into your pocket or backpack when you’re on a hike or passing through a convenience store on your way for a long drive.

If you read closely, though, what looks like a beefy snack is in fact loaded with preservatives and some types of junk, and along with these, “Hydrolyzed Soy, Corn, and Wheat Proteins.” Definitely not GF.

BBQ (barbecue) sauce can be a tricky one, especially if you are headed to a barbecue where friends have already prepped and marinated the foods that will be grilled or cooked.

BBQ sauce is really just sauce that makes meat sweeter and less dry, so it can have any combination of products, depending on the brand. While some BBQ sauces may be simple and GF, many contain wheat starch, combinations of starches (unspecified) or vinegars derived from malt or barley.

Also watch out for soy sauce, coming in for our next non-GF food.

In recent years, soy sauce has been created in gluten-free varieties, but what I always like to tell friends is that soy sauce in its original straight-from-Asia varieties has three main ingredients: water, soy and wheat.

Sometimes wheat is even in higher concentration than the soy itself, depending on the brand. While you should avoid soy sauce with your sushi unless the restaurant has a certified-GF variety, also make sure that any food you consume were not cooked with soy sauce.

I find this most difficult while I’m on vacation, as it can take a lot of explaining, and sometimes with the help of Google Translate. 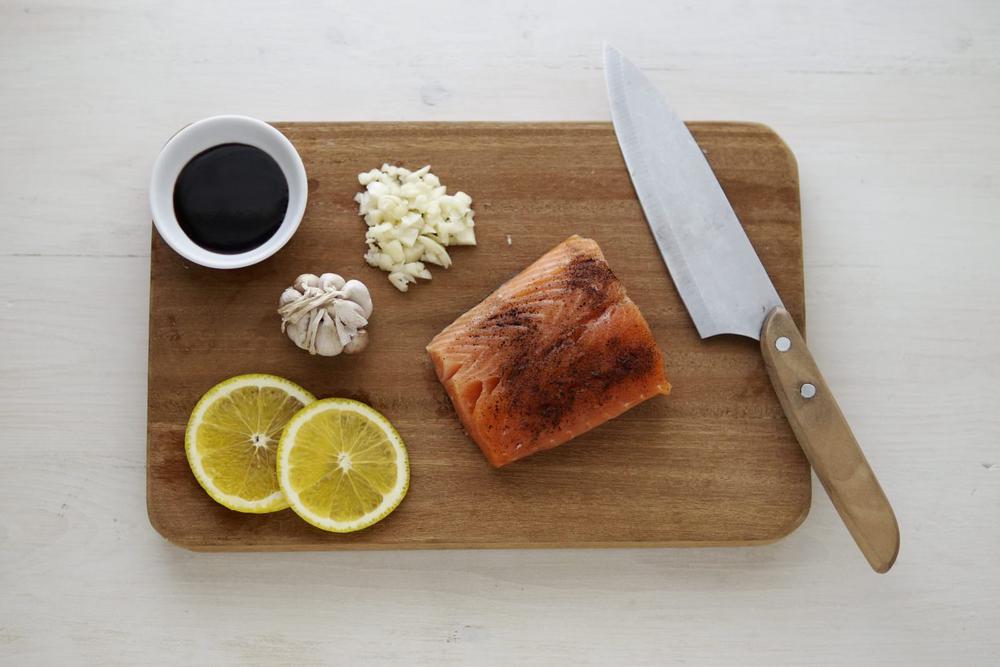 Keep in mind that barley malt is always going to be a gluten derivative, and these are never safe for anyone with celiac disease or sticking to a strict gluten-free diet. 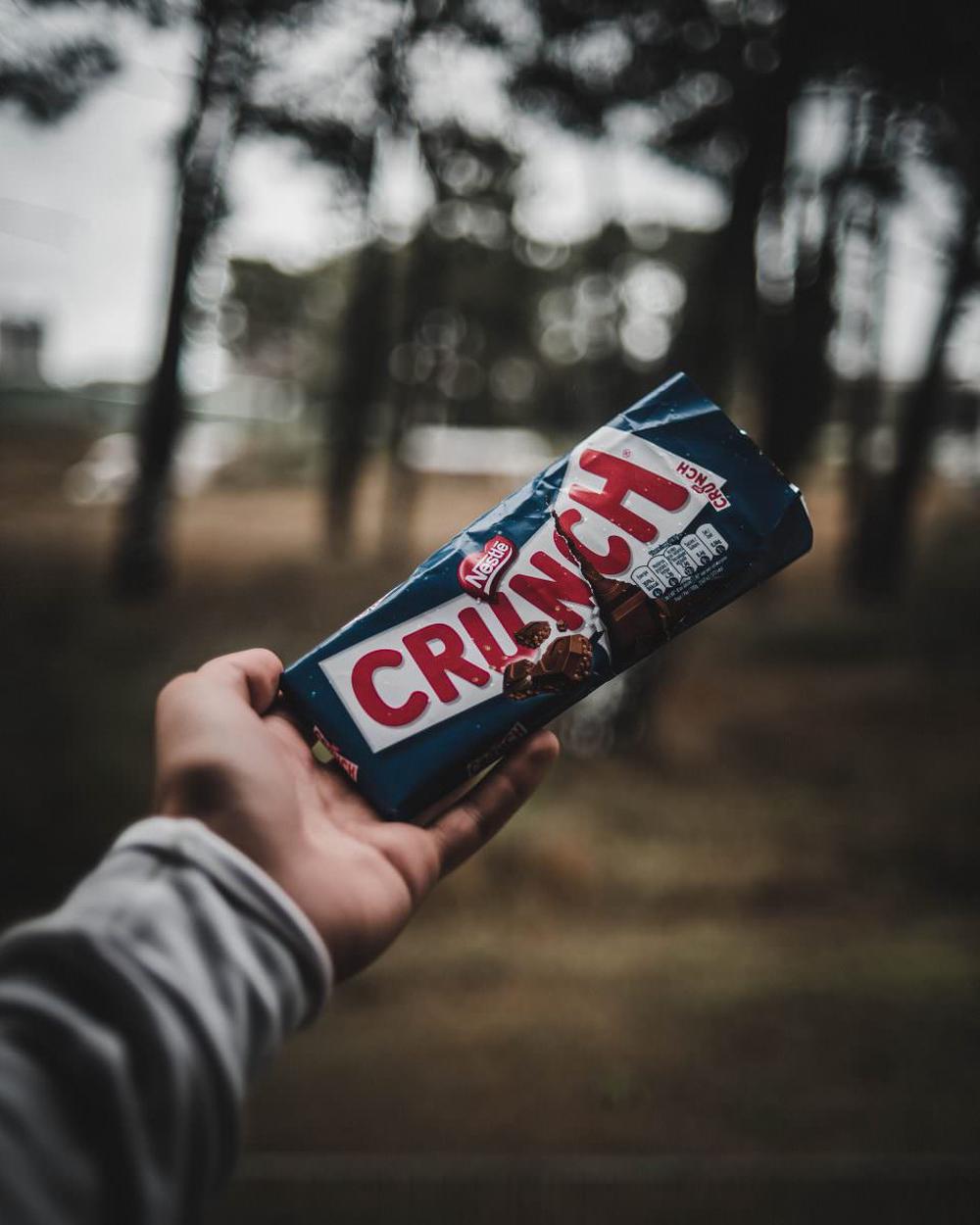 We wish Quaker Chewy Granola Bars were GF, as they make the perfect dense yummy snack bar that comes in a multi-pack, but a list of ingredients makes them full of gluten.

If you err on the side of eating oats on occasion, keep in mind that not all ‘oatmeal cookies’ will be solely made of oats; in fact, this is rarely the case.

Oh no… Not Milky Way!

Yes, it’s true — at the bottom of the ingredients for Milky Way candies is ‘malted barley,’ plain and simple. This one’s not for our GF friends!

Keep an eye out for teriyaki sauce, as it’s overwhelmingly flavorful and very common in Asian foods, or in kitchens of friends and family.

Teriyaki sauce is similar to soy sauce in that its main ingredients are wheat, soy, water, sugar and other additives for flavor like ginger, but, some teriyaki sauce bottles may list ‘soy sauce’ as an ingredient on its own, failing to mention the entire wheat component.

Teriyaki sauce will only be gluten-free if specifying as such, and it’s best to check the label or contact the company to ensure that no gluten-containing soy sauce is present.